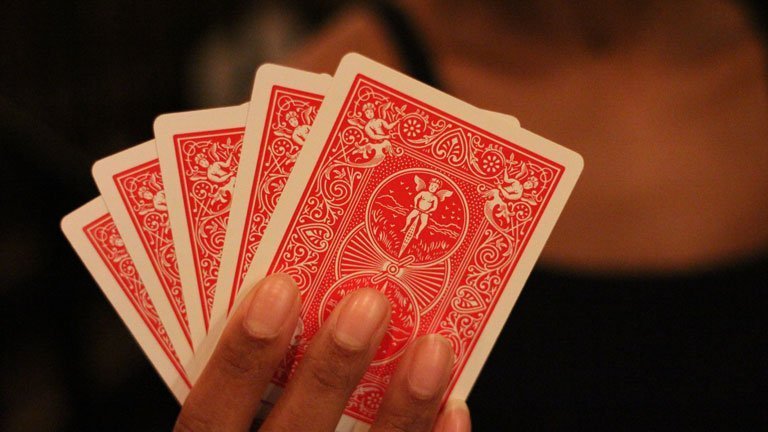 Wason’s card game is a classic psychological experiment used to understand people’s reasoning (Johnson-Laird & Wason, 1970). The game consists of the following: 4 cards are placed in front of you. Let’s say for example that they are the following:

A rule is then explained to you. Following the same example: “If the card has a vowel on its front, it will have an odd number on its back”.

Finally, you are asked which cards you have to turn in order to see if the rule is met or not in this game.

Do you already have your answer? Write it down.

It is important that you know that few people, however intelligent they may be, are right with the answer. Most people commit one of two logical reasoning errors.

The first error, apparently the most frequent, is to understand that the opposite of the rule must also take place. In this case, the mistake is to think that it is necessary to flip a card with an odd number. If a vowel is found on the other side, it means that the rule is met. False.

The second mistake is about the difficulty that people have to look for disconfirmatory information. In other words, many people know from the beginning which card to turn to check that the rule is true, but not what card should be turned to ensure that the opposite of what the rule says is not true.

If I explain it with an example, surely it will be better understood. In these times of political turmoil between Catalonia and Spain, if your brother-in-law is, for example, a unionist, he may interpret the news with the optics of a rule that goes something like this: “If you are a separatist, you hate Spain.”

Then, when your brother-in-law reads that the new President of the Generalitat, Quim Torra, of separatist orientation, has written tweets that say “the Spanish only know how to plunder”, he is going to say to you “you see? the pro-independence people hate Spain”. This is the equivalent of finding the information that confirms the rule.

If instead he sees the scene in which a supporter of Josep Anglada calls Jordi Évole a “charnego de mierda”, to belittle his non-Catalan ancestry, and he thinks “this must be an independentist”, he is committing the first error of reasoning, because if the person in question is a supporter of Platforma per Catalunya, Anglada’s party, he is in fact fiercely anti-independence. The rule does not say that all those who hate Spain (or despise Spanish origins, in this case), are separatists.

But the worst thing is that your brother-in-law will probably be happy with his timeline on Twitter, the messages that he gets on Facebook or the photos he sees on Instagram – where in all likelihood he follows only people who share his ideas – and will not go to look for the disconfirming information, that is, the one that could show him that you can be an independentist without hating or belittling Spain or the Spanish.

Thus, for example, this article by former President Artur Mas (who launched the entire independence process) indicating that an independent Catalonia can be a good ally of Spain, a comment that would challenge his basic belief, will not reach him.

The former is merely an example and, needless to say, you may also encounter a similar situation if your brother-in-law is pro-independence and follows a rule such as “Spain only steals from us”. In fact, this problem of reasoning occurs with all kinds of preconceived ideas (rules) that people have.

It is always easier to retain the information that confirms that “if he/she is in the Popular Party, he/she is corrupt”, “if it is a woman, she is a bad driver”, “if the teacher scolds me, it is because he hates me” and so many other cases in which, perhaps because of laziness, perhaps because of parsimony -certainly not because of a lack of intelligence-, we are not going to make the effort to look for the information that would show us that this rule is not true.

Do you find it clearer now? And have you guessed right in your answer?

You would have to turn the letters A and 4.

To turn 7 is to make the first mistake.

Turning the D card does not add anything.

By Gabriel Zúñiga, Director of Studies at TBS in Barcelona