Technology, Resources, Jobs: Everything you need to know to make the best education decisions!

Nowadays, the world we live in is constantly changing. As a matter of fact, our social life is cyclical and evolutionary. For any one of us, the structural changes happening in the economy—which we personally have no control over—have a deeper ricochet effect on us that we are aware of.

To give you an example of such a situation, the changes to economic policies in France in 2017 favour the development of the technology sector and the development of the technology sector will consequently create new job opportunities and be a more important source of wealth. In more general terms, the digitalization of the world will simplify our consumption habits and change the way we work, in the same way than the invention of paper printing or the industrial revolution did. Such phenomena have occurred previously, but only at a much slower pace. We must be prepared to adapt quickly to the new digital economy.

We will look into which sectors of the economy are changing and how things are working so you can anticipate events before anyone else. Let’s take a closer look at: economic policies; the future business objective; workplace changes and education. 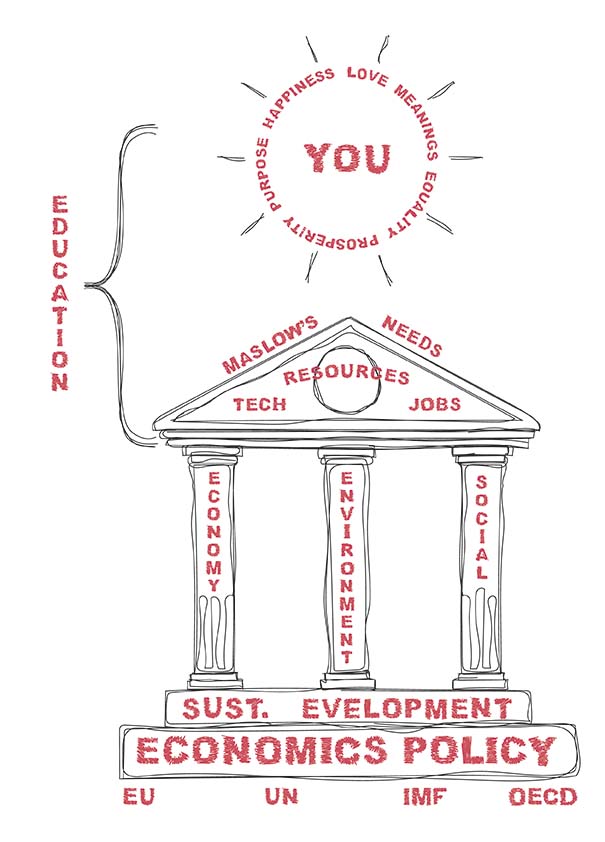 In May, France and the Macron presidency began to shift their political priorities, moving from being a social-rights oriented country to a more investment-oriented paradise. According to a New York Times article about France and Germany, the status quo of Germany’s recognition as a hub for employment and economic stability is challenged by weaker German cohesion and a fairly dynamic French president. The unpredictability of the future and of the European Union will most certainly change the dynamics of where power and wealth resides.

To conclude, a change in presidency which brings a different economic approach can influence a change in the dynamics of where wealth is created within a region (during the industrial revolution in Europe, the automotive industry became the main source of wealth and job creation as opposed to agriculture). Everyone should have an awareness and knowledge of the transition of wealth and be able to anticipate changes.

So, we now know that politics has the power to influence the development of one industry over another. In Europe, the question of sustainable development is an increasing concern, but I also believe it to be a source of business opportunities for any young professional entering the workplace. According to Ernesto Sirolli’s TED Talk from 2012, sustainable activities have a dual objective: 1. to ensure a source of growth and prosperity for all, and 2. to avoid compromising resources for future generations. However, the practices used so far have been ineffective due to the way we approach the concept. I am of course referring to international aid and support development in African societies. We fail to provide sustainable tools that can truly grow economic prosperity because we want to control growth and not let the locals work towards it by themselves. This means that there is definitely room for improvement and an opportunity for creative individuals to step in and rethink the process.

Now, returning to the definition of sustainable development, I would argue that not compromising the resources of future generations is an understatement, and that instead we should aim to favourably increase resources for future generations. Interestingly, the term sustainable development has been around since the 1970s, but it only began to have a truly global impact in 2015 when the UN released its strategic goals for sustainable development. It is recognized as an absolute necessity to move conventional economic growth and social mentalities towards low-carbon economic growth coupled with environmental efficiency management policies and inclusive social development. Then again, the development of such practices will impact our professional and personal lives in the near future, so it is a topic worth bearing in mind.

To present you with an example from my own experience, I was recently involved in ecologically and economically sustainable development projects in Colombia. My goal is to take a closer look at the early adoption of sustainable practices in a recently emerging economy. One day, I want to be able to play an active role in finding more effective ways to ensure global prosperity and end poverty.

OK, so now a complete potential draft of our economy is taking shape! Looking at how powerful government policies are in the development and creation of new industries, we can see that the development of sustainable practices has created structural changes in the workplace and will continue to do so. Let’s take a look at a study that reveals 4 simple evolutions that have been predicted to occur within the workplace in the coming years.

First of all, according to a McKinsey study, considering the future of the collective rather than just your own career should be the new way to envision life and success. The workplace of the future is employee-growth centred rather than customer-based.

Secondly, artificial intelligence and robotics should be seen as team members rather than competitors. Indeed, technology will create non-existing jobs, so we might as well adapt to working complimentarily. Workers and teams work remotely in different places around the world; the management of such a team must adapt to the new organization and anticipate risks. Indeed, there are social costs to remote working (keeping people engaged and motivated).  For example, some coworking spaces are already very popular. I had the chance to visit Numa in Paris, and I recently attended the opening of another in Toulouse, called At Home. The principle is simple; space is free and open to anyone, although entrepreneurs and freelancers make up the majority of the users.

All these changes create a ricochet effect that travels down the economic ladder, all the way to the workplace. However, just like a boomerang, structural changes come from the bottom and swing back up as other forces become involved. In this situation, education becomes the most powerful factor involved with transitioning from the conventional economy to the new digital economy, and it also ensures the success of young professionals.  According to the aforementioned study, McKinsey’s reports on the importance of lifelong learning skills suggest that it is of the utmost importance to continuously educate oneself and to learn new skills—complex skills in particular. As a matter of fact, robotics and intelligent machines will be in charge of repetitive and pattern-oriented jobs. This is because robots are now endowed with cognitive intelligence and memory which allows them to perform basic and simple interactions.

Moreover, as part-time workers and freelancers become commonplace, the gig economy will change the way people work and therefore the way you will learn the skills of becoming a professional. According to Investopedia, the gig economy is an economy in which temporary and flexible jobs are the norm. Learning many different skills based on a wide variety of projects and jobs appears to be a vital focus of study in order to thrive in this era.

Personal growth and skills, rather than becoming stuck in the same role for your whole life, is the way of the future. Despite scary and radical changes in education, increased flexibility and career mobility are positive externalities of the new era that awaits us.

Here is drawing that recaps the entire article. This is just one interpretation, and it is certainly not the only one:

As a general conclusion, in order to make the best study choices you need to know what kind of education and training you need to enable you to thrive in this new era. Adaptability, diversification, complementarity with robotics and an interest in collective and sustainable economic development are important concerns.

As a student, you have the opportunity to receive direct training on this transitioning. My point is, when beginning your life and professional activity in an ever-changing environment, you need to know what is happening, observe the changes and compare who you are with who you want to be in life. However, politicians and public administrations also have a major role to play. Have faith and keep going!

Who are you and who do you want to be in life?

By Théo Beyt, alumnus of TBS