The Most Common Errors When Preparing a SWOT Analysis 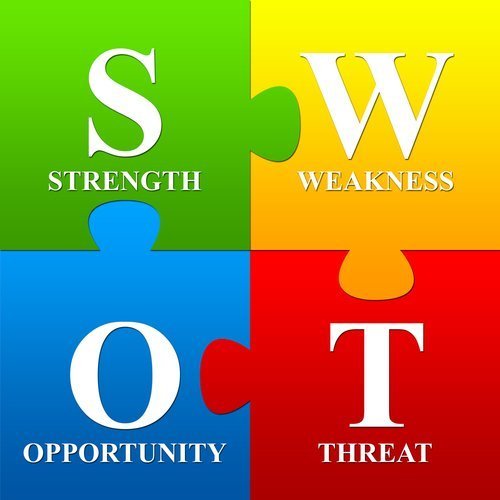 A SWOT Analysis is a simple yet powerful tool that allows us to locate ourselves in a specific scenario or market. Furthermore, it has become a very frequently used tool, perhaps due precisely its very simplicity, by a great many people.

It should be acknowledged, however that, possibly because to its universal use, most SWOT Analyses appearing today are, please excuse my candour, hopelessly bad; that’s right: most. And what does it mean if we say that a SWOT Analysis is bad? Well, really only one thing: that it is not useful. But useful for what? Well, for analysing and understanding our current situation in relation to the environment in which we operate. So, if we want that doing a SWOT Analysis does not become a meaningless exercise (“I was told to do a SWOT Analysis, and here it is”), we need to avoid several very frequent errors which will be addressed in this article and, of course, the necessary solutions to these errors are included as well.

As a starting point, we can use the following example of a SWOT table that has many of the various habitual errors that can occur when creating one. To put it bluntly, this is the worst SWOT Analysis in history. Take a look and try to spot the methodological errors it contains.

Let’s review this terrible SWOT Analysis the errors it has, which are among the most frequent mistakes when creating SWOT tables.

Items in the wrong place

Probably one of the most common errors is that certain elements are put in the wrong box. A SWOT table is divided in a vertically bifurcated way between internal factors and external factors. Internal factors are those which we have control over, while external factors are, logically, those which we have no control over. In the example above we can find a few instances of errors of this sort. For example, “Dependence on the banks”, as such, is not a Weakness but a Threat. In this same way we find a Strength, “Satisfied customers”, which is also not in the correct location. Despite the fact that we can take actions to improve customer satisfaction (we already have, precisely, an entry in Strengths reading “High efficiency in recent projects” which takes this into account), customer satisfaction depends ultimately upon the customers themselves, we do not have control over this. Hence, this should be listed as an Opportunity, not as a Strength.

Opportunities that are desires or goals

One of the most classic errors in a SWOT Analysis is confusing Opportunities and desired outcomes, intentions, strategies, actions or goals. This is the case with all entries that are formulated using infinitive verb conjugations. “Launch a campaign using our website”, or “Offer good services”. To state this point clearly: the Opportunities of a SWOT Analysis refer not to things that we could do, but are instead things that already exist that could be used for our benefit should we decide to. Any possible actions belong to the phase following the SWOT Analysis, which consists of planning strategies and taking steps to improve our position in the market; such steps that are not in motion now, at the time we are analysing the situation, when there is nothing to be planned, only analysed.

In many SWOT Analyses it is possible to find an entry that seems to have been repeated on the left and right sides of the table, which gives rise to contradictory meanings. In the example above, the clearest instance of this relates to legislation, which in Opportunities is categorized as “permissive” while at the same time, under Threats, it is termed “restrictive”. Which one is correct? Is the law permissive or restrictive? In all likelihood the law has some aspects which are permissive, while others are restrictive. The solution, of course, is to list the specific statues or policies that are either one or the other.

Now we come to the most important error, the one which most often robs a SWOT Analysis of all utility: a lack of depth in the analysis. There are several instances of this in the example, but allow me to point out the most obvious and flagrant ones: “crisis”, “young team”, and “multi-disciplinary team”. Let’s be clear, a SWOT Analysis, or any other type of analysis for that matter, that is not profound is useless. Writing “crisis” has the same significance as writing nothing at all. What does “crisis” mean? How does this affect us? Are its effects exclusively negative for us? And, most of all, what possibilities for making improvements are there if I just write an entry like “crisis”? I cannot make use of this in any way. On the other hand, if I formulate the entry more precisely, focusing on what “crisis” means to me, it is very likely that I will be able to create entries that are more interesting and useful. It might occur to me, for example, that the crisis creates opportunities, such as “the public is more receptive to special offers”, or that, due to the crisis, there is an “increase in public sector investment”. Equally, it is possible to identify threats, such as “the purchasing power of the consumers has been reduced” or “per person spending on non-essential items has decreased”. What these four entries (the two opportunities and two threats) allow me to discover after making a more rigorous analysis of the concept of “crisis” is, first, a greater and more profound awareness of the current situation. Secondly, and most important, it offers me the chance to do something about it, including taking advantage of opportunities (I could create promotional strategies based upon special offers to attract customers; I could seek out more public sector support) or to combat the threat (I could create a more flexible system of sales financing that stimulates consumption; I could emphasize the useful qualities of my product so that the customer comes to perceive it more as a necessity).

Clearly, it is important to understand that tools exist to be useful. If we do not use them correctly, they will cease to be useful and become instead another type of chore that we do because we have been requested to do so, from which we derive no benefit from. Let’s make a deal: from now neither of us will never characterize any SWOT table, or for that matter, any other type of investigation as an analysis if it is not precise, concrete, detailed and, above all, have depth. Deal?